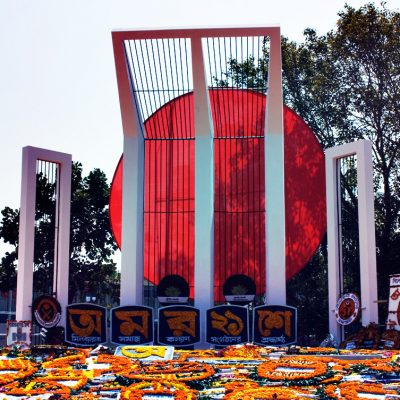 Memorial of the Language Movement of Central Shahid Minar is dedicated to the martyrs of the movement in 1952. It is located on the outskirts of Dhaka Medical College in the heart of Dhaka, the capital of Bangladesh. Thousands of people come here on February 21st every year to pay their respects to the martyrs of the language movement. It is one of the tourist points in the heart of Dhaka.

Shaheed Minar was first built on 23 February 1952. Its planning, site selection and construction work were all done at the initiative of the students of Dhaka Medical College. At the east-south corner of the present Shaheed Minar, a small building on the foundation of the martyr’s blood-shed was 10 and a half feet high and 6 feet wide. Immediately after its construction, it became the epicenter of the city’s attractions; The protestant movement gained symbolic status. Here, people come to the crowd in groups. On the morning of February 26, Abul Kalam Shamsuddin, editor of the Daily Azad, officially inaugurated the Shaheed Minar. Later that afternoon, the police surrounded the hostel and demolished it. Then in 1957, after the recognition of the Bangla language as the state language, the construction of the present Central Shaheed Minar started and ended in 1963.

You can easily come to Shahbag from any place of Dhaka and come to Shaheed Minar area with rickshaws.