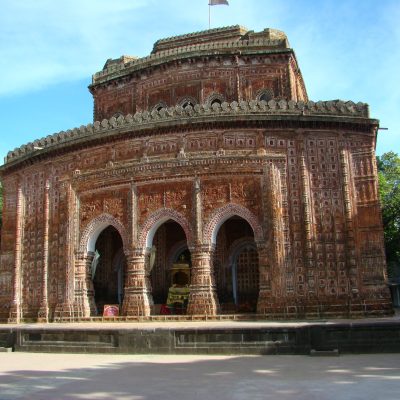 Kantaji Temple is an ancient architecture of Bangladesh. This temple is known by various names, some know it as Kantajiu Temple or Kantanagar Temple, and to many the Kantaji Temple is also known as Navratna Temple. The temple, built in the 18th century, is located at Kantanagar village on the banks of the river Thapa, about one mile west of the Dinajpur-Tetleia road, 20 km from the city of Dinajpur.

There is a chance to travel from Dhaka to Dinajpur by bus and train. Usually buses depart from Dhaka to Dabanjpur from Gabtali and Kalyanpur. Bus services include Nabil Paribahan, SR Travels, SA paribahan, Hanif Enterprise, Kia Transport, Shyamoli Transport, etc. Non-AC and AC bus fare is tk. 600 to tk. 1000 Besides, some buses from Uttara in the capital left for Dinajpur.

The inter-city fast train express train leaves from Dinajpur at 8 pm from Kamalapur railway station in Dhaka. Inter-city train Ekta Express departs from Dhaka at 10am. And the Panchagarh express train leaves from Dhaka at 12pm. It costs 185 to 900 rupees for these train tickets in Srinivasad. From Dinajpur, you can easily go to see the temple of Kantaji by renting an autorickshaw or CNG.