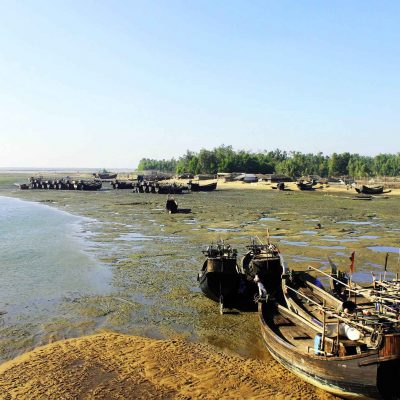 Cox’s Bazar is a popular destination for tourists who come to Bangladesh. Its diverse attractions, such as street vendors, large markets and noteworthy sights, see an influx of thousands of visitors each year. But there is one jewel amongst the attractions of Cox’s Bazar, namely Moheshkhali Island. It is an island that is known for its beauty and tranquility, and many eager rickshaw operators patiently await the arrival of visitors, to offer them a unique tour of the island.

Moheshkhali - the only mountainous island of Bangladesh stands in the Bay of Bengal, about 15 km away at north-western side from the Cox's Bazar. With 268 square kilometre of its total area, this lovely island attracts many foreign and domestic tourists with its archetypal beauty of nature.  It's termed as the jewel of Cox's Bazar - world's longest unbroken sandy sea beach. The island is also connected to the mainland, but traveling to Moheshkhali upazilla by boat is recommended, as it is a kind of adventurous journey to catch precious memories of exploring beautiful Bangladesh.  It takes a half-an-hour by speedboat and by trawler almost one hour.

The island is surrounded with breathtaking mangrove forest. The spectacular short-ranges of hills and stunning landscapes seduce the heart of tourists. There are some hills standing at just over three hundred metres. At the low-lying areas of the island tourists will find salt-field and shrimp cultivation and on the plain area eye-catching green betel grove. There are a few small beaches.

The other attractions at Moheshkhali are 'Shrine of Adinath' - a Shiva temple, the quaint Buddhist temple as well as a Pagoda that beckons tourists to visit the island. Adinath Temple of 600 hundred years old is very vibrant one that brings in many devotees on different occasions. It is located on the summit of Moinak Hill of the Island. Every year in the Bengali month of Falgun (February), a 13-day long annual fair is held here. The fair takes place at the foot of the Moinak Hill. Thousands of Hindus from home and abroad participate here for worshiping. To go to the Temple, tourists have to remove shoes but they can wear socks.

The Temple is 6 m high and measures 10.5 m × 9.75 m; the inner walls are 1.05 m thick, while outer walls are 0.60 m thick. The Temple consists of 3 parts; the northern part, which is older, contains two square rooms (3.35 m each side) for worship – the eastern one has the image of Adinatha Banalinga Shiva and the western one has the image of eight-armed Durga (Idol). The entrance of the Temple is bow-shaped, while the entrances on the northern and southern sides have been closed with brickwork. There are two windows, one on the east and the other on the west side. The two rooms are covered with domes on pendentives. The finials on top are decorated with lotus, kalasa and chakra. The tops of the octagonal pillars have kalasa and twined scrolls. The top of the arch on the western side has floral and the eastern one has trixul decoration. There are two niches on the southern wall. At the backyard, there is a pond. The pond's water is very clean.

There is a long history of this Temple. The construction of Adinath temple has close association with the Natha community. It is believed that one of the disciples of Goraksanatha may have named the ghat (river landing) at Moheshkhali after the guru. Natha philosophy evolved out of the long association of the Saivites with the Buddhists and in the 10th-11th centuries emerged Tantric Shastras. Adinatha (variants Matsyendranatha or Minanatha) emerged through this process of evolution. Nathism represents the folk religion of Bengal based on mantra-tantra and asceticism.

Buddhist Monastery is another attraction at Moheshkhali Island. This monastery is located at Boro Rakhaine Para of Gorokghata, near to the dockyard of the island. There are several buildings inside the monastery premises. Also inside the boundary, there are two pagodas, which are made of bronze. Inside the Monastery, there are several statues of Lord Buddha with a big one. The Buddhist people mostly Rakhaine community come here for their regular prayer.

Tourists can explore the tiny village called 'Thakur Tala'. There are some souvenir shops near the temple. There are many things to make fun in this drifting island.  Standing on the peak of hills in this island you can have a glance of the immense blue water of the Bay of Bengal. The island is very much green and picturesque; one will just fall in love with nature. The island is also abounds with a wide varieties of local fishes that offer you nice delicacy.

Moheshkhali has a unique and harmonious atmosphere. Visitors will enjoy the simplicity of the island lifestyle and are guaranteed to meet very colorful characters along the way. How and where to start discovering the magic of Moheshkhali is up to you, but the island will provide an unforgettable journey through one of the most beautiful destinations in Bangladesh.

Saint Martin, in the Chittagong Division, is the only coral island of the country.  The local people call this tiny island “NarikelZinjira” meaning coconut island in their native language because of the abundant coconut growing here. The island is located in the southernmost part of mainland just at the river mouth of Naf river.

This is a small island (area only 36 km2) in the northeastern part of the Bay of Bengal, about 9 km south of the tip of the Cox's Bazar-Teknaf peninsula, and forming the southernmost part of Bangladesh. There is a small adjoining island that is separated at high tide, called Chera Dwip. It is about 8 kilometres (5 miles) west of the northwest coast of Myanmar, at the mouth of the Naf River.

Millennia ago, the island used to be an extension of the Teknaf peninsula, but at a later time some portion of this peninsula got submerged and thus the southernmost part of the aforementioned peninsula became an island, and was disconnected from the Bangladesh mainland. The first settlement started 250 years ago by Arabian sailors who named the island 'Jazeera'. During British occupation the island was named after the then Deputy Commissioner of Chittagong Mr. Martin as St. Martin Island.

This landmark demarcates as the international borderline between Bangladesh and Myanmar. Somebody named it “Daruchini Dwip” for the surrounding naturally beautiful scenery and crystal clear blue water of the Bay of Bengal.Unlike the long sandy beach of Cox’s Bazar, you can walk around this entire small island.

Nothing compares to the beauty of the beach. The blue water surrounding the sandy beach with lines of coconut trees offering fresh coconut drinks, fresh live seafood- all beckoning to explore this unchartered territory.Whoever comes here for a short visit ends up repenting not staying for long like overnight and turn this unforgettable journey into a memorable one. Though the area of the island stretches 8 square kilometers, it shrinks into only 5 square kilometers during high tide. Beautiful resorts are there to celebrate the vacation at its fullest.

Oceanic Scuba Dive Center is the only dive operation in the country, and is run by a friendly group of ex-navy divers. Saint Martin offers the only diving opportunity in Bangladesh. There is Chera dwip, close to the Saint Martin, as the name implies this adjacent part of the island gets separated from the mainland during tide. It is the coral island which is reachable either by foot or by getting on a boat. It can be a tourist boat or a motor boat. To hire an engine boat, the rate is around 150-200 BDT, and for a speedboat, the rate is around 1200-1500 BDT, it is possible to reach there by foot also.

The mainland is made up of both live and dead forms of different species of corals. There is little greenery on Chera Dwip. Though is no permanent residents on the island, there are temporary shops which serve fried fish and coconut water for the tourists. So, visitors can start early to visit the island and come back by evening. By taking bus to teknaf, anyone can easily reach Saint Martin by ship. One of the best and the safest ships are Keari Sindbad which reaches to Saint Martin comfortably in 2 or fewer hours. Keari Sindbad cruise journey is a pleasant one where anyone can see the spectacular views of Teknaf's hill on one side and Mayanmar on the other side while it cruises along the Naf River. All the ships and cruises stars journey from Teknaf to Saint Martin around 9AM-9.30AM and return journey starts from Saint Martin to around 3PM. Ships are available also from Cox’s bazar which starts at 3 PM.

Ferries leave the island around 3pm.Keari Sindbad ferry and you can purchase a round trip ticket; which can same day return or 1-2 days later. Prices are same whenever you return. The return fare on Keari Sindbad start from BDT 550-800 as of September 2014.

The stunning beauty of the Saint Martin, the amazing sea food, the unbelievable sunset can mesmerize any travelling like tourist there. You may whisper from the core of your heart, amar sonar Bangla, ami tomay valobasi!