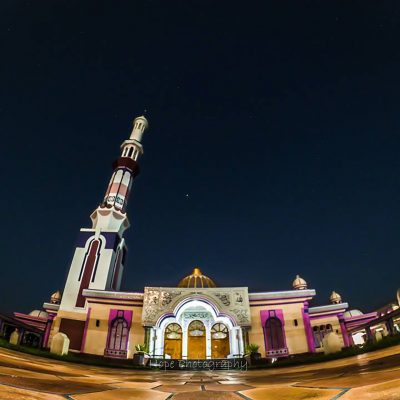 The Baitul Aman Jame Masjid Complex, commonly known as Guthia Mosque of Barisal, is a mosque complex of Bangladesh having a land area of 14 acres. The Baitul Aman Jame Masjid Complex consists of a Mosque, a huge Eidgah,a graveyard, three lakes, Madrasa and an orphanage. Established on December 16, 2003, Guthia Mosque is also a tourist spot in Bangladesh.
Construction of the mosque complex began in December 16, 2003 under the supervision of SAS Foundation. The complex is a private initiative by Sharfuddin Ahmed, a local politician, and a businessman. The mosque took four years and one month to be completed.

To visit Gutia Mosque first one needs to reach to Barisal and the most relaxing way to reach Barisal is launch. After reaching Barisal, one needs to take a local bus to Ujirpur. From Ujirpur, tempu or CNG auto rickshaws are available which will take one to the Mosque. Local motorcycles are also available from Barisal city if anyone wants to enjoy the journey to its fullest. Besides launch, Buses are also available from Dhaka to Barisal.