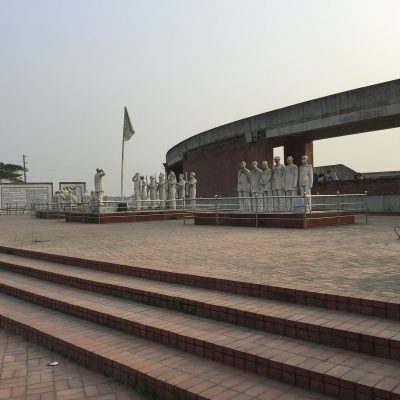 The liberation war of Bangladesh started at the 26th march of 1971, people all over the country started feeling the vibe and joined the liberation war. Father of the nation Bangabandhu Sheikh Mujibur Rahman was arrested in 26th March. On April 17, first provisional government was formed which was a red letter day in our history. Tajuddin Ahmed became the first prime minister of Bangladesh.

The Mujibnagar government was formed at Baiddyanathtala. The oath taking was witnessed by hundreds of foreign journalists who observed the birth of a new nation called Bangladesh.

The president of this new nation was Bangabandhu Sheikh Mujibur Rahman, Syed Najrul Islam became the first acting president in the absence of Bangabandhu. Tajuddin Ahmed became the first prime minister M Mansur Ali was the finance minister. M Quamruzzamana was the home, Relief and Rehabilitation ministerand Khandakar Mustaque Ahmed was the foreign affairs and law minister. This provisional government took oath in the palce and marked the day of utmost importance.

Bangladesh remembers the day with respect and the courage, conviction and determination of the politicians are remembered with highest gratefulness. Their patriotism, firm determination gave the freedom fighters an oath to fight against the oppressor and to search for the final victory of Bangladesh.

It was very important to organize the soldiers, fighters, organizing civil administration. Securing arms and connecting internationally for the liberation war through diplomatic action. As the great leader was absence, it was necessary to others to organize people for the liberation war, these leaders played vital role in this position. In the absence of the great leader, these people gave their leadership for the struggle, for the direction of the freedom fighting. Above all, they needed to keep the leader alive in the minds of every freedom fighter as the leader was fighting just beside them.

Now there is a monument which resemblances the memory of historical 17th April where a memorial complex covering 20 acres has been built where the ministers took their oath. The place has become a tourist attraction for everyone now a days.

Mujibnagar, the golden place of Bangladesh marked a very special date for Bangladesh and gave our freedom fighters a new courage of gaining independence.