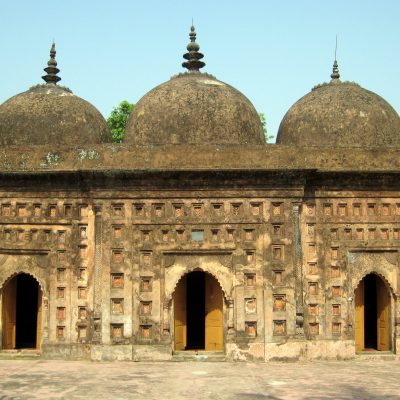 Nayabad Mosque is located in Nayabad village in Kaharole Upazila of Dinajpur. Mughal ruler Shah Alam constructed the mosque. Workers from Persia were designated for the making of this construction. In the year of 1793 it was built and the interesting fact is that, the workers who came from Persia to make Kantajew temple, were assigned to make this.

Beside the river Dhepa, the mosque is situated. It is very close to the historical Kantajew temple. The distance is just 1.5 km south-west of the temple. The village is called Nayabad and the mosque is entitled after this. An inscription has been found on the central doorway, where it is written that the construction time period is 1793 AD, when Mughal emperor Shah Alam 2 was the emperor. During that time, Raja Baidyanath was the zamindar of the royal family.

The Muslim architects made the temple who made the Kantajew temple. They settled in Nayabad, which was a very beautiful place of Dinajpur and made the mosque for their own use. A grave has been found in the premises, who is basically of an unknown person. According to local belief, the grave is of Kalu Khan, the master architect of kantajew temple.

The mosque is oblong three domed with octagonal towers at the four corners. The central one is bigger than the others which gave the architect a stand point. All of them are in equal in height and width. An arched window each is there on south and north points. Central mihrab is bigger than the flanking ones also. Three hemispherical domes cover the mosque. Pendentives have been used in the phase of transition also. There are also parapet and cornice which are straight.

Terracotta plaques are in the decoration part of the mosque. There are 104 terracotta plaques which are rectangular, the platform used is enclosed by a low brick with only one access. The whole architectural place is enriched with magnificent beauty thought he whole mosque is not very big in size.

The whole building is oblong. The roof has three domes and each corner there is an octagonal tower. The outer dimensions of the building is 12.45 meters by 5.5 meters with walls that are 1.10 meters thick. The total mixture is designed to beautify to look the mosque a unique place to look at.

You can reach to the mosque from Dinajpur town. Just take a bus headed to Birganj from Dinajpur bus stop and drop at Baro mile which will cost you nearly 30 taka. You will find boatman also to cross the silky river. Then just a little walk and you will reach to the place.

The mosque will give you a pleasure of exploring new with a very short schedule, just travel and explore the immense beauty of it.