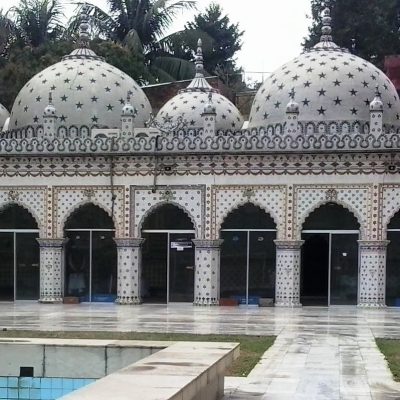 Star Mosque is located on the Abul Khairat road in the Armanitola area of ​​old Dhaka. As there is no inscription on the mosque, information on the exact construction of the mosque is not available. However, it is believed that Mirza Golam Pir Tara, the zamindar of Dhaka, built the mosque at the beginning of the 18th century. The mosque built by Mughal architectural design is known by many to the Sitara Mosque or Mirza Ghulam Pir Mosque.

The mosque’s length and width were 33 and 12 feet, respectively. On the roof of the rectangular mosque are 3 white domes with white stars drawn in blue. The ‘motif’ of the stars is particularly noticeable in all the mosque designs. It was for this particular design that the mosque became known as the mosque. To enter the mosque, 3 doors are placed on the east, 1 on the north and 1 on the south.

You can easily reach Armanitola from any place of Dhaka city by visiting the Rakksha in Chankharpul area of ​​old Dhaka. From Chankharpool, they can rent a rickshaw for 30 tk to go to the mosque.

According to the information found on the plaque on the walls of the Nawabad Mosque, the mosque was built in 1793 during the reign of Emperor II Shah Alam. At that time King Vaidyanath was the last descendant of the Dinajpur dynasty. According to locals, the Nawabad Mosque was built by Muslim architects and workers who came to the construction of the Kantanagar Temple in the mid-18th century.

There is a chance to travel from Dhaka to Dinajpur by bus and train. Usually buses depart from Dhaka to Dabanjpur from Gabtali and Kalyanpur. Bus services include Nabil Transport, SR Travels, SA Paribahan, Hanif Enterprise, Kia Transport, Shyamoli Paribahan, etc. Non-AC and AC bus fare is Rs. 600 to Rs. Besides, some buses from Uttara in the capital left for Dinajpur.