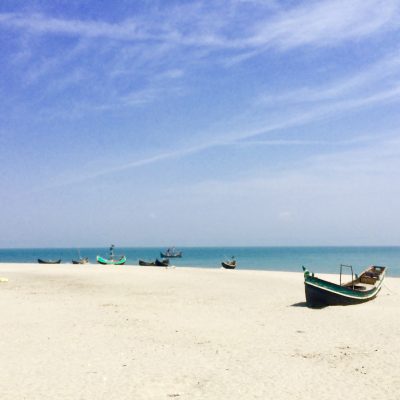 Saint Martin, in the Chittagong Division, is the only coral island of the country.  The local people call this tiny island “NarikelZinjira” meaning coconut island in their native language because of the abundant coconut growing here. The island is located in the southernmost part of mainland just at the river mouth of Naf river.

This is a small island (area only 36 km2) in the northeastern part of the Bay of Bengal, about 9 km south of the tip of the Cox's Bazar-Teknaf peninsula, and forming the southernmost part of Bangladesh. There is a small adjoining island that is separated at high tide, called Chera Dwip. It is about 8 kilometres (5 miles) west of the northwest coast of Myanmar, at the mouth of the Naf River.

Millennia ago, the island used to be an extension of the Teknaf peninsula, but at a later time some portion of this peninsula got submerged and thus the southernmost part of the aforementioned peninsula became an island, and was disconnected from the Bangladesh mainland. The first settlement started 250 years ago by Arabian sailors who named the island 'Jazeera'. During British occupation the island was named after the then Deputy Commissioner of Chittagong Mr. Martin as St. Martin Island.

This landmark demarcates as the international borderline between Bangladesh and Myanmar. Somebody named it “Daruchini Dwip” for the surrounding naturally beautiful scenery and crystal clear blue water of the Bay of Bengal.Unlike the long sandy beach of Cox’s Bazar, you can walk around this entire small island.

Nothing compares to the beauty of the beach. The blue water surrounding the sandy beach with lines of coconut trees offering fresh coconut drinks, fresh live seafood- all beckoning to explore this unchartered territory.Whoever comes here for a short visit ends up repenting not staying for long like overnight and turn this unforgettable journey into a memorable one. Though the area of the island stretches 8 square kilometers, it shrinks into only 5 square kilometers during high tide. Beautiful resorts are there to celebrate the vacation at its fullest.

Oceanic Scuba Dive Center is the only dive operation in the country, and is run by a friendly group of ex-navy divers. Saint Martin offers the only diving opportunity in Bangladesh. There is Chera dwip, close to the Saint Martin, as the name implies this adjacent part of the island gets separated from the mainland during tide. It is the coral island which is reachable either by foot or by getting on a boat. It can be a tourist boat or a motor boat. To hire an engine boat, the rate is around 150-200 BDT, and for a speedboat, the rate is around 1200-1500 BDT, it is possible to reach there by foot also.

The mainland is made up of both live and dead forms of different species of corals. There is little greenery on Chera Dwip. Though is no permanent residents on the island, there are temporary shops which serve fried fish and coconut water for the tourists. So, visitors can start early to visit the island and come back by evening. By taking bus to teknaf, anyone can easily reach Saint Martin by ship. One of the best and the safest ships are Keari Sindbad which reaches to Saint Martin comfortably in 2 or fewer hours. Keari Sindbad cruise journey is a pleasant one where anyone can see the spectacular views of Teknaf's hill on one side and Mayanmar on the other side while it cruises along the Naf River. All the ships and cruises stars journey from Teknaf to Saint Martin around 9AM-9.30AM and return journey starts from Saint Martin to around 3PM. Ships are available also from Cox’s bazar which starts at 3 PM.

Ferries leave the island around 3pm.Keari Sindbad ferry and you can purchase a round trip ticket; which can same day return or 1-2 days later. Prices are same whenever you return. The return fare on Keari Sindbad start from BDT 550-800 as of September 2014.

The stunning beauty of the Saint Martin, the amazing sea food, the unbelievable sunset can mesmerize any travelling like tourist there. You may whisper from the core of your heart, amar sonar Bangla, ami tomay valobasi!