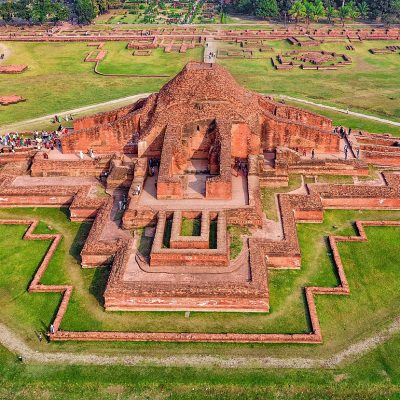 Somapura Mahavihara is a Buddhist monastery of the 8th century situated in Paharpur, Bangladesh, a significant archeological site. It is one of the five great mahaviharas that were founded in ancient Bengal during the Pala period (meaning great vihara or large monastery). To form a network, all were interlinked, and Somapura Mahavihara is the largest of these ancient Buddhist establishments.

Through Bogra to Paharpur there are no direct busses. You have to fly first from Bogra to Joypurhat instead. Go to the Charmatha bus stand to hit Joypurhat. A rickshaw will cost 20 – 30 Tk from the city center to Charmatha.

Buses to Joypurhat go roughly every hour. The bus I took left at 8:30, and took almost two hours. A ticket costs 80 Tk per person.

In Joypurhat, you’ll be dropped off at the bus station. From the Joypurhat bus station you can get a bus to Paraphur. The bus to Paharpur takes about half an hour, and costs 20 Tk per person.