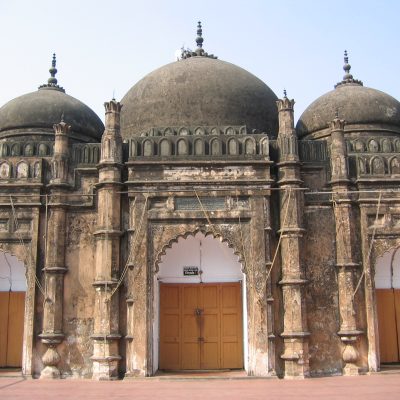 In 1704-5, under the direction of Kazi Khan Mohammed Ebadullah, the chief of Dhaka, this mosque was built by Khan Mohammad Mirdha Dotala! About 17 feet high, it was built on a platform with three domes. Madrasah on the northeast side of the prayer house! Except for the mosque and the madrasa, the rest of the area is open, assuming the students were taught here, and the rooms below were a place to stay! If you want to see Khan Mohammad Mridha Mosque you have to go to Lalbag of Dhaka!

The mosque can be visited at any time, if any lover of history and archeology wants it. That is why you have to come to Rickshaw from Dhaka University or walk to Lalbagh Fort. From the main gate of Lalbagh Fort, Rahmat Ullah will be seen beyond the boy’s high school.