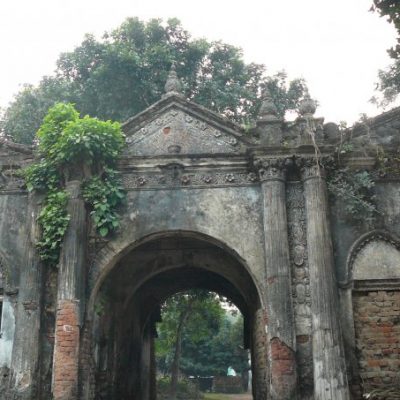 During the last stage of the British period, this zamindar bari was the most important place for Muslim zamindars. Then Ghughudanga was undivided, there were 30 police stations. In that time the zamindar collected annual lease amount of one lakh taka. In the estate, there were fourth one Tehsils, eighty peydas and Barkandaz to stand. The main residential area for this zamindar bari was built in Ghughudanga village. Now a days the family members live in the Eidgah residential area of Dinajpur.

Ghughudanga zamindar bari was located within eleven states. They are

Indo saracenic revival architecture was followed in the time of constructing this palace. Before the liberation war, the building had its own magnificent beauty. Several antic pieces were collected from the palace, which are now archived in the national museum of Bangladesh. Such as the golden chair, gold koi fish, beautiful umbrella with silver haft, a big hand with silver haft, four silver stick and many other beautiful pieces.

If you ever visit Dinajpur, you must explore this piece of beauty, history and tradition!