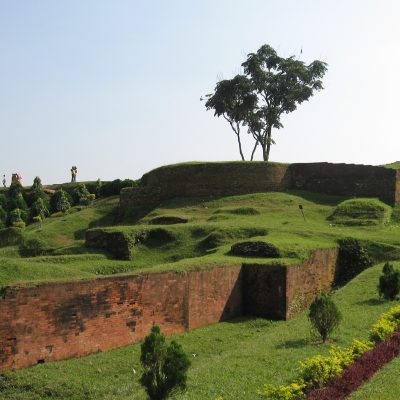 Dating back to at least the 3rd century BC, Mahasthangarh is the earliest urban archaeological site that has been discovered in Bangladesh.

Considered the oldest city in Bangladesh, Mahasthangarh, Bogra dates back to at least the 3rd century BC. History of Mahasthangarh is amazing, the name is taken from the words Mahasthan meaning a place of exceptional sacredness, and garh, meaning fort. Later discoveries have led researchers to the conclusion that the name of the area was initially Paundravardhanapura or Pundranagara, referring to the Pundra Kingdom in Indian epic literature, which was said to rule over an area stretching from West Bengal, to Bangladesh and into the area of India now known as Bihar.

Mahasthan was first mentioned in a Sanskrit text of the 13th century entitled Vallalcharita. It is also mentioned in an anonymous text Karatoya mahatmya, circumstantially placed in 12th–13th century. It is believed that the location for the city in the area was decided upon because it is one of the highest areas in Bangladesh. The land in the region is almost 36 metres (118 ft) above sea level, whereas Dhaka, the capital of Bangladesh, is around 6 metres (20 ft) above sea level. Another reason for choosing this place was the position and size of the Karatoya, which as recently as in the 13th century was three times wider than Ganges.

This ancient archeological and historical site, established around 2500 BC, is located at Shibganj upazila of Bogra district. It lies on the western bank of Korotoa River, about 13 km north of Bogra city on the Dhaka-Dinajpurpur highway. It is believed that the rulers of the Maurya dynasty founded the city. It is the earliest evidence of urbanisation in ancient Bengal. A broken limestone slab from the 3rd century BC that bears six lines in ‘Brahmi’ script has been found there with the name ‘Pundranagar’ inscribed on it.

Inside of the place, many sightseeing areas are there.

Bairagir Bitha-The construction took place in 4 eras. The excavation have disclosed some base remains of temples. It was able to restore 2 sculptured sand stone pillars.

Khodarapathar Bitha- Stones engraved with the sublime Buddha and the followers in Anjali were restored.

1. 8th Century findings has stone of Visnupatta during Pala period.

The excavated mounds outside the fortress are

Govinda Bitha- It is situated on opposite of site museum. From 3rd to 15th century remnants of 2 temples have been disclosed.

Totaram Panditer Dhap-It is located in village of Paharpur. Architectural remnants of a destroyed monastery have been found.

Gokul Medh: People also know it as Behular Basar Ghar or Lakshindarer Medh. It is located 3km to south of Bogra-Rangpur Road in Village Gokul. It disclosed a terraced platform with 172 rectangular cells.

Skander Dhap: It is located on village Baghapur 3.5km to south of the fortress area on Rangpur Bogra Highway. A sandstone named Kartika was found there and a sandstone was exposed.

Khulnar Dhap: Named after Khullana spouse of Chand Sagar it is located in village Chengispur m west of north-west corner of the fortress area.

Bhimer Jangal: It stems from north east of Bogra and advances towards north to a place named Damukdharer bit. This place has more of a military feature that is protect the country from east.

Jogir Bhaban: It is located 3miles on west of khetlal road in Bagtahali. The holy places there are located in south east corner of an area.

Arora: It is located in Arora village and it stands on Masandighi.

Rojakpur: While advancing west from Gokul to Haripur a traveler had to pass through west arm of the latter village. In Bogra khetlal road close to Chadnia hat, West Haripur and on south of Somrai Bil we can find the village of Rojakpur.

Mathura: Located on east Bumanpara it extends to the east garh. The village Mathura is located on the north.

Mahastangarh museum: It is small and well preserved museum inside Mahasthangarh. It consists of affluent surroundings. Statues of hindu gods, terracotta plaques and some well restored bronze images which are usually from Pala period. The gardens there are lucrative. It is closed on Sunday and Monday mornings and each day lunch break is from 12:30-2:30pm.The main entrance is close to the fortress area.

Mahasthangarh is our pride that must be treasured. We must take care to preserve this invaluable heritage of our country.