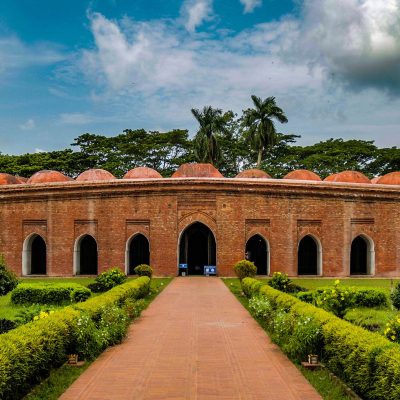 The 60-domed mosque is a world heritage site located in the Bagerhat district of Khulna Division, Bangladesh. As there is no inscription of the mosque, no information is available about the founding and construction period of the sixty dome mosque. However, the mosque’s architecture is believed to have been built by Khan-i-Jahan in the 1500s. The stones used in this mosque were brought from Rajmahal. The 60-domed mosque is one of the World Heritage Sites in Bangladesh. In 1983, the city of Bagerhat was given the status of a World Heritage Site by UNESCO.

Several buses departing from Megha, Banaful, Falguni, Ara, tourists, Boleswara, Hamim and Dola depart from Dhaka’s Sayedabad bus terminal every day from 6 to 10 am and 7 pm to 10 pm. The Gbatli bus terminal leaves Sohag, Shakura, Hanif and Eagle transport vehicles. From the Bagerhat bus stand, you can go to the sixty dome mosque by rickshaw or easibike. Apart from this, Khulna will be able to travel from Dhaka to Khulna on the Inter-city Train Sundarbans Express. It will take about an hour and a half from Khulna.

To enter the premises of the sixty dome mosque, people have to book a ticket for 20 bucks. Admission tickets for foreign visitors are worth two hundred rupees. Closes all day on Sundays and is open on Mondays from 2pm. Open from 10am to 6pm in the summer. It is closed from 9am to 5pm in the winter. The castle is closed from 1 to 1:30 pm, both in winter and summer. However, Friday is closed from 12:30 minutes to 3:30 minutes for Zuma prayers.