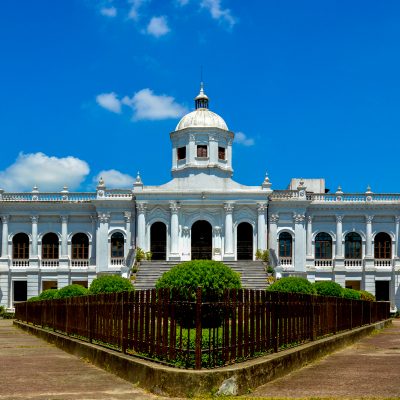 Tajhat palace is one of the finest architectures of Bangladesh. The palace now holds the Rangpur Museum, it is situated in Tajhat, Rangpur. This is situated three KM south-east of the city of rangpur.

The palace was built by a Hindu merchant, called Kumar Gopal Lal Roy. He was a jeweler who made his business fortune in the place. He came from Panjab and it is believed that the name Tajhat came from his profession. Taj means ‘crown’ and hat means the ‘local market’. He became the Jamidar of the estate, after the demise of his father. He introduced ‘Bou Mela’ which means ‘wives festival’ along with the kite festival in the palace every year. This became a real incident of joy and happiness for the people of Rangpur. The fair held in the first two days of Bengali new year. They also celebrated with splendidness the last day of Baishakh and the first month of bangla calendar with grandeur and funfair.

Gopal Roy maintained nice relation with his tenants. At the beginning of 20th century, he started making a royal palace there. 2000 workers were appointed for the construction of the palace. 1.5 million dollars was invested for this project then. The palace is shaped ‘U’ in design, white stones, marbel stones and limestones and red bricks were used for the construction of this palace. The palace has a big blank space covering 76 meters and the stairs are gorgeously made with imported white marbels.

In 2005, government declared the place as the museum of rangpur. The palace is filled with terracotta artifacts and in the 2nd and 3rd floor, there are private properties of Maharaja Gopal.

Sanskrit and Arabic manuscript are found in the palace. Copies of Mahabharat, Ramayan and Quran are found also which were attributed to Aurangzeb. Some black stone hindu cravings are also there, mainly of the deity Vishnu.

The entry fees of this palace is 20 BDT there for Bangladeshi locals and 200 BDT for Foreigners. During Eid, the palace remains closed in Eid day and the previous day of Eid. It opens just after the day of Eid.

This European style palace is a beauty of architecture and a wonder of Bangladeshi tourist spot. It is famous for its wonderful style of buildings and the museum which was announced later, is full of Jamindar’s several properties. Many architectural beauties of Bangladesh are not in the good mode, many of them are broken in many parts due to irresponsibility and lacking of taking care. But this Tajhat palace is almost in a good shape and thus it has become one of the main attractions of north Bengal as well as Bangladesh. Photography is banned inside of the museum for its safety. The garden part of the palace and the front field of the palace are maintained nicely, people visit the palace as a part of their north Bengal visit and thus the palace is upholding Bangladesh. If you ever visit north Bengal, Tajhat palace, the remembrance of Gopal Lal Roy is an open invitation for you that you wouldn’t want to miss by any chance.